“I am very much supported. My future has been nurtured by the support given to me. You have turned negatives into positives, frustrations into happiness, and gave me the energy to be positive. All these are as a result of your support.” 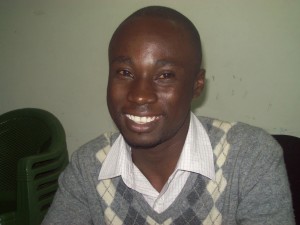 Elias’s mother was just 14 when she gave birth to Elias, she had to drop out of school and before long she was remarried to a man as his fourth wife. Elias’ stepfather had many children and sent Elias to live with his grandparents where he was often beaten. By 11, Elias ran away and went to live on the streets of Nairobi. He lived on a rubbish dump, became involved with violent gangs and was addicted to glue-sniffing to deaden his daily hunger. It was during his time living on the streets of Nairobi that Elias found HopeHIV’s Undugu rehabilitation project. He was given a chance to complete both primary and secondary school and gave his spare time to train other street children on topics such as HIV prevention and curbing substance abuse.

Now Elias has gone to University and his passion is to go back onto the streets to help other youngsters in similar circumstances. While at university he has continued to visit schools and children living on the streets, giving advice on higher education and he is helping launch a campaign against drug and substance abuse.
Since leaving home, Elias’ Mother, Stepfather and his Stepfathers other three wives have all died. He hopes that from his pursuit of education and a job, he will one day be able to financially support his siblings.

LiveTwice have offered Elias a scholarship for his final year of university to help him achieve his goals – a real ‘second chance’ opportunity to benefit not only Elias, but others in the future.