Amongst the Statistics – Migrants in Italy

It has famously been said: “A Single Death is a Tragedy; a Million Deaths is a Statistic”.

Most of us have heard stories on the news of the tragic loss of life caused by overfilled migrant boats sinking on route to Europe. Many have heard of the economic impact on European countries and towns from the arrival of migrants. Some have seen the statistics; where people have come from, where they were going, gender, age, populations. Rarely do we get the chance to know some of the individual stories, the people amongst the statistics.

In the past year there have been a growing numbers of young migrants in Italy who have been placed in hostels by the government in towns across Umbria. At LiveTwice, we have been able to provide clothes, shoes, hygiene products and companionship to those placed closest to the Community Centre. Having spent time with these young people we are slowly getting to know them and understand where they come from, what they have been through and their hopes for the future. Read on to meet just three of the thousands of people you have heard so much about. Their stories are shared with permission and their names have been changed to protect their identities. 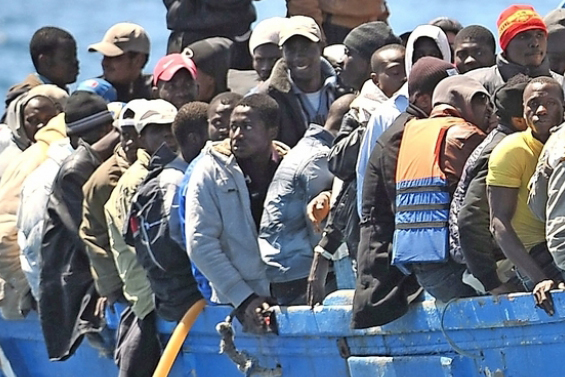 “I left my country [Nigeria] because it was really getting worse, due to the killings in my region.

I travelled to Italy by land through the desert, the journey was really tough because it was during the summer and it was really hot in the desert. We spent six days in the desert without food and water due to the breakdown of our vehicle.

Crossing the Mediterranean Sea was another life or death journey. We crossed the sea on a small fibber boat with 50 people on it.  When approaching Italy, the boat began to leak and water was pumping in so fast, everyone thought that we were not going to make it. Everyone was crying, waiting for the boat to sink. We believed we were going to drown. An oil ship saw us and quickly called the rescue team. We were saved with no lives lost.

Living in a foreign country is not that easy. Here you don’t have any family, no body you know who you can go to in times of need or while starting up a new life. Some people make you feel like there is no future for you anymore but some make you feel at home, giving you hope that there is life ahead.”

“My father died when I was young and then my mother died in 2010. I had to drop out of school to provide for my two younger sisters. I left the village for Kano in the North of Nigeria and started working taking peoples bags off of the bus. Some days I got 200 Naira (approx. 64p) which wasn’t enough to care for myself and still send money back to my sisters. I didn’t even have a house to sleep in. A man who travels to Libya told me I could go to Libya and find a job. I couldn’t afford to go but he told me he would help me and I could pay back the money.

I was working in Libya for over a year when my boss and two of my friends were killed at work by the Libyan police. I ran away to try and save my life but I was caught and put in prison. I stayed in prison for 3 months until a soldier freed me as he needed someone to work for him. While I was working for him he asked why I was in prison so I told him the whole story. He said that after I had finished the work for him it would be better to go to Italy than to go back to prison. The soldier had a brother who took people to Italy across the sea. I was afraid about going to Italy but he told me it would be a good boat. I stayed with him until I got the boat in May 2014.

My hope for the future is to find a good job so I can help my sisters in Nigeria.”

“I finished all my training in fixing tiles and painting, but finding work was hard. [Living in a Muslim region where] people knew that I was a Christian, it became very difficult to find work. I travelled with a friend to Libya where I stayed for two years before crossing to Italy.

I travelled from Nigeria to Libya by car. It took ten days to cross the Sahara desert. It was like hell in a cell. I was arrested a few times while I was in Libya for being at church. Living in Libya got too much, there was fighting all the time and you could hear gunshots and bombs every day so I decided to cross over to Europe. The boat ride was scary as we knew there was only a 50% chance we would make it, thankfully everybody in our fishing boat made it alive.

Living in a foreign country is hard with all the administration there is to deal with. I find it both scary and interesting at the same time. There is a lot of adapting, learning and socializing to do in order to feel at home. When you move to another country your entire world changes. Things you thought “just are” no longer apply. Not everyone thinks like you, or does things the way you have always done them. You can learn to stop being a stranger eventually, but you will always be a foreigner.”

To help us continue to support more people like Michael, Victor and Emmanuel please donate.